From a pure value standpoint for the Blues, I loved this trade.  Moving up twenty spots into the first round for a fourth line player is steal by any accounts and I applaud Doug Armstrong for making this trade.  I am a big believer in adding value to a team at any time and this pick does exactly that.  The Penguins have been quoted as saying they were frustrated with other teams taking liberties with their superstars and targeted Reaves specifically because he is the best enforcer in the league (this was news to me that Reaves was the NHL’s best enforcer).

Alright, even if Reaves is the best in the league at his craft… why would the Blues want to hold onto him? The enforcer role in the NHL has been dead since the rule changes in 2006 and Reaves’ roster spot is holding down the team’s goal total.  Goal scoring wins championships as the Penguins have taught us the past two years.  By the way, I love Ryan Reaves and the enforcer role. As I mentioned in my first blog, hockey needs more villains and this guy fits the bill.  Hockey needs more hits, highlights, and hot takes from players.

As for what the Blues got in return, first round picks are a necessity in today’s NHL with such an emphasis on scoring and the need for low salary 20- and 21-year old’s to keep teams cap compliant.  There is a significant gap in the likelihood of a first and second round draft pick. This chart is a little dated but my sense is the gap is likely even greater now: 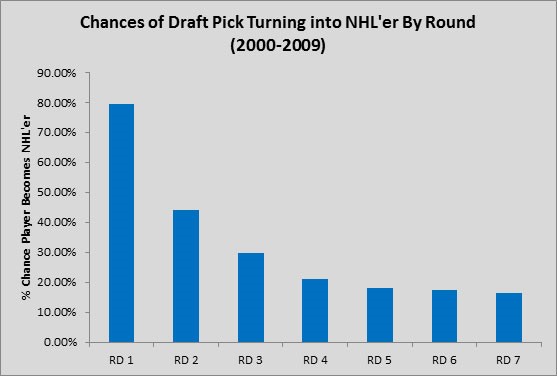 Oscar Sundqvist is a nice piece also.  He’s 23 and projects as bottom-6 center.  Most likely will replace Brodziak at the end of next year when his contract expires.  I’ll talk about the prospect the Blues took with the No. 31 pick in a later blog because I think trades should be evaluated on their initial face value; don’t get me started on how stupid trade trees are (although the Phil Kessel trade tree is pretty funny).

The Ryan Reaves trade also clears up a point of contention I had with the Blues’ expansion draft protection list.  In a surprise move, the Blues elected to protect Ryan Reaves instead of David Perron who was eventually taken by the Vegas Golden Knights.  According to reports, the Blues and Penguins had pre-negotiated this deal weeks in advance and the team wanted to assure Reaves would be available for the trade as many mock drafts had Vegas taking Reaves should the Blues have left him unprotected.  If you wanted to play the trade tree game though J:

In my opinion, the $3.75MM in cap savings is another huge win for the Blues which were already projecting to be in a cap pinch for the upcoming year.  The moves leaves the team with a bit of shortage of quality right wingers behind Tarasenko but generally a solid upgrade for the future.

Add in Klim Kostin with No. 31 pick